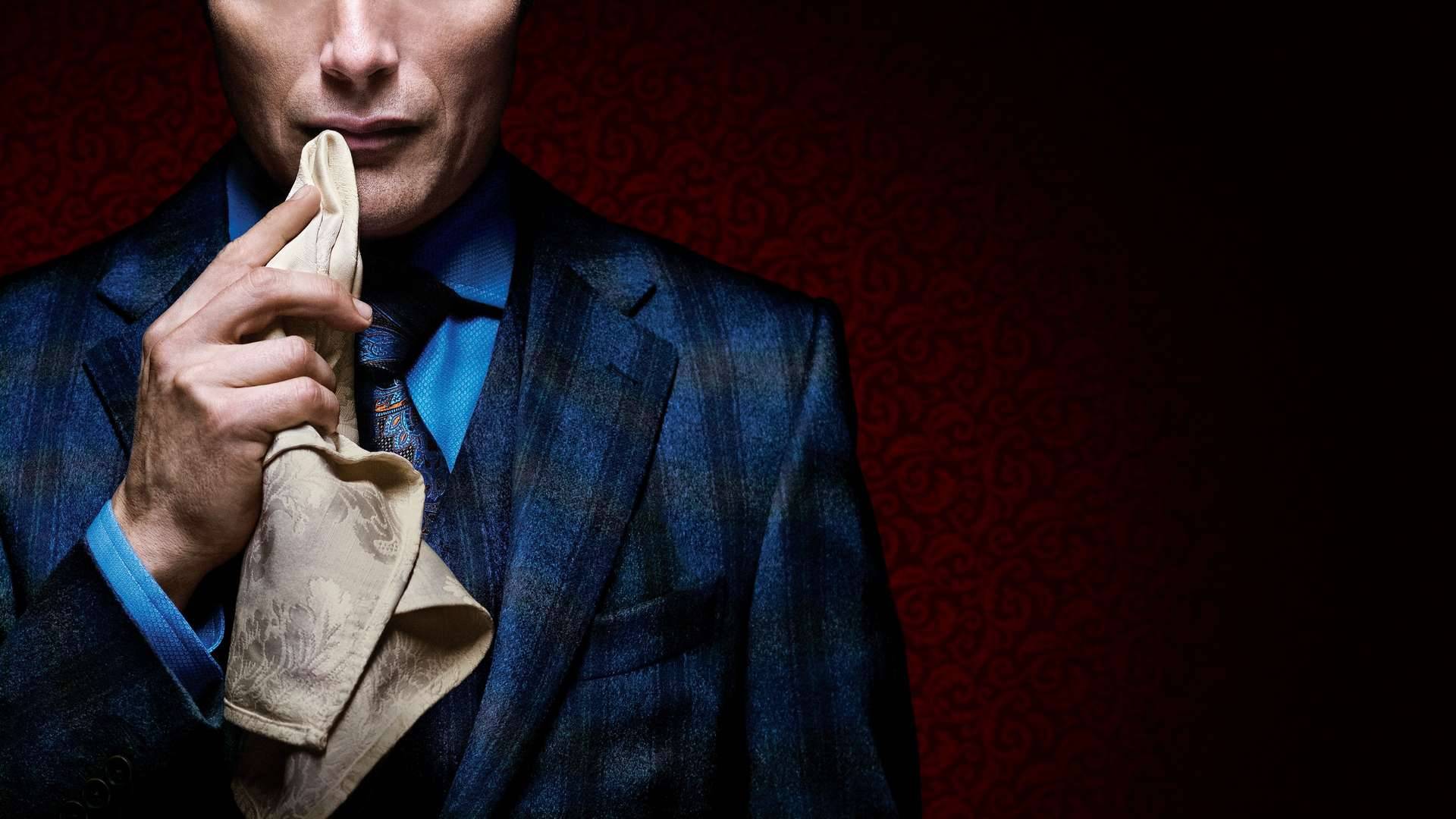 It was inevitable, right? Most movie reviewers end up talking about TV shows as well. I didn’t expect this to be honest, as I’m not a big fan of these… In fact, rarely have I watched a whole series. Even if single episodes are compelling, I find it difficult to be consistent watching them, so they end up getting abandoned. “Yeah, I’m just gonna watch another episode of Friends instead”. Well, something different happened with Hannibal.

A guy I know recommended this show, saying it was one of the most visually stimulating series ever, that it made the audience think, it treated you as an intelligent person… So, I bought the entire show on Blu-Ray. As a fan of The Silence of the Lambs (1991), which is one of my all-time favorite movies, I couldn’t be more excited! But expectations are pretty dangerous, as they always define the experience you have. Let’s find out how this first season turned out. 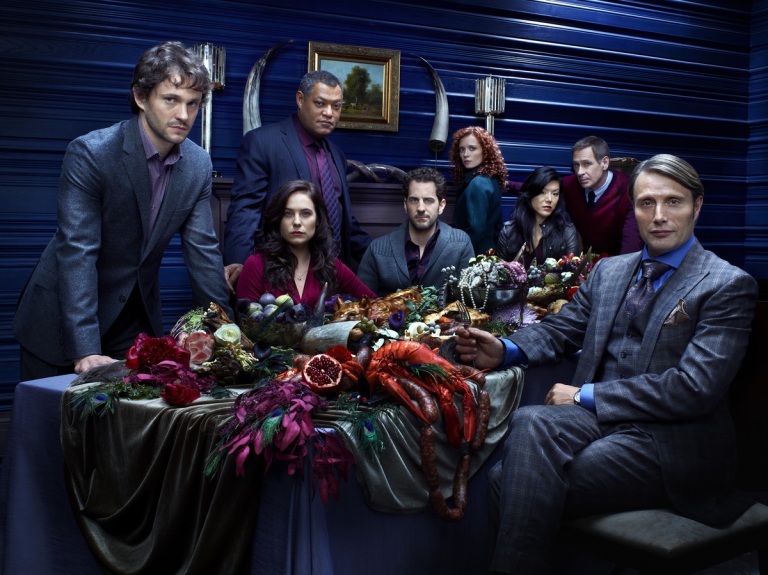 Hannibal reimagines the stories told in the books and movies, even if the very same characters are featured throughout the entire season. This time around, we will get to know Will Graham in-depth, an expert detective who is able to empathise with the most dangerous serial killers and determine their modus operandi just by visiting the crime-scene. This ability is incredibly useful for the FBI, so he is given quite a lot of work, which has terrible consequences for him. Worried about how deeply he feels the connection to the criminals, Will seeks advice in a psychiatrist… Unluckily enough, that doctor turns out to be Hannibal Lecter.

This time, however, Will Graham is portrayed by Hugh Dancy, a very talented actor that may have slipped under the radars of most of us – until now. His performance is terrific, with lots of intense moments but also packed with small subtleties that make his character believable and relatable. It is amazing to see his struggle to guess what’s going on inside his mind, or his efforts to figure out what kind of psychopaths he’s dealing with during the investigation cases. His character is in decay throughout the entire season and it’s a wonderful transformation. Dancy’s job in Hannibal is nothing short of excellent. 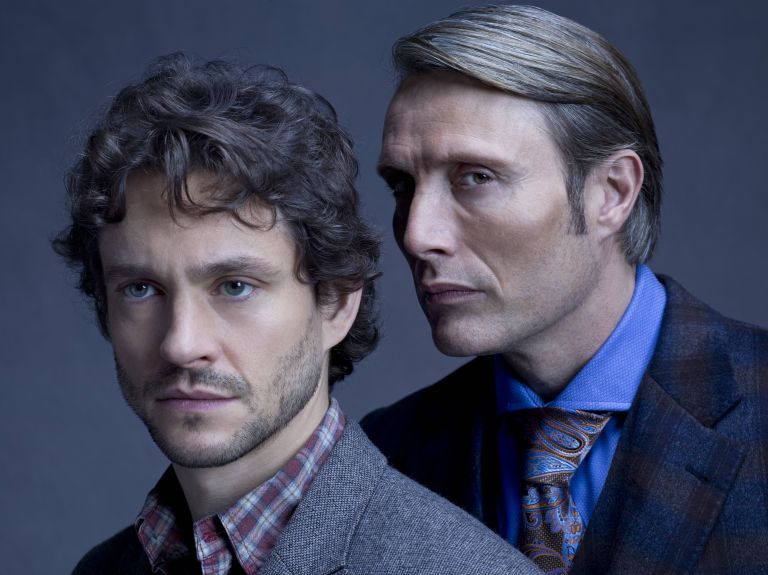 The one and only Mads Mikkelsen is in charge of portraying Dr. Lecter in this show, and he gives a very unique performance. I’m very glad that instead of trying to create a character similar to that of Anthony Hopkins in the famous trilogy (The Silence of the Lambs, Hannibal and Red Dragon, 1991-2002), Mikkelsen has taken a new approach this time. His own Lecter is dark, mysterious and calm. He doesn’t look like a crazy guy who should be in an asylum, he proves expertise when hiding his real self from the rest of the characters. You can see his effort at holding back. That’s why when he strikes, it is so much more thrilling. Hannibal is a man who has difficulties with relationships, and Mikkelsen conveys that beautifully with each line’s delivery. What a great performance for such an amusing character.

Both protagonists are joined by a good cast, even if they don’t shine as much. Laurence Fishbourne does a very correct job as Jack Crawford, the head of the department that keeps pushing Graham to his limits. Freddie Lounds is a great character this time (unlike in Red Dragon), portrayed by Lara Jean Chorostecki. You will hate her, and that’s the way it should be!

Every single episode is a psychological thriller on its own, with incredibly written and tense conversations. It is absolutely fantastic how the characters interact with each other, how they try to get into the minds of the others seeking for answers. Conversations are truly great. 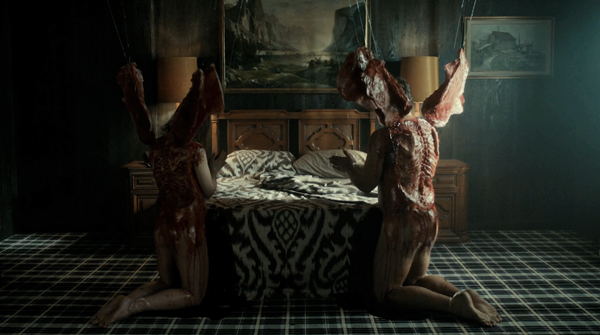 The season begins with episodes that are indeed tied with a story-arc, but they work independently too: each of them has its own plot, they were self-contained, with a serial killer that must be found by the FBI team (later on the season this changes and just the main storyline is left… with some of the previous killers making a comeback, so you’ll have to closely pay attention to every detail!). It may sound weird, but those crimes are gorgeous. The meaning behind them, how the crime-scenes are shown, the way Will reconstructs what happened… Everything is beautifully depicted. It has some of the finest cinematography ever on TV, and the terrible crimes really benefit from that. Just to give an example, the criminal in the fifth episode creates angels by ripping apart the flesh from his victim’s backs (see picture above). The metaphorical meaning this has, the imagery it creates, it’s very creative. Sure, it’s gruesome and macabre as f*ck, but hey, Hannibal has never been for the weak-hearted.

Probably my favourite feature of the show is how the writers play with what the audience knows. We all know about Lecter, so we expect certain things from him. This expectations are used to surprise us with new stuff, and this, together with a frenetic pacing (too quick at times, in my opinion), creates a constant edge-of-the-seat feeling. Nothing is shoved into the viewers’ faces, it’s our job to keep track of what’s going on, which results in an immersive, yet at times difficult experience. 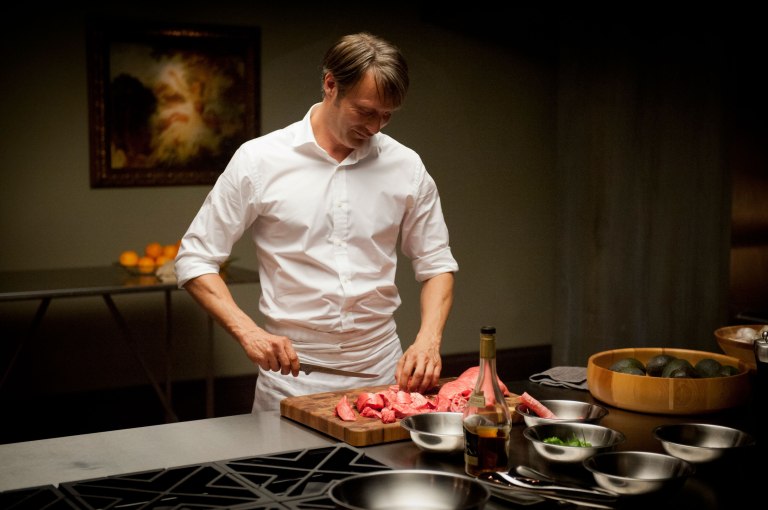 I loved this first season and I’m eager to watch more. The way it plays with the audience is fascinating, from taking unexpected turns to playing with the imagery to create feelings, from calm to disgust – FBI agents are talking about a cannibal and, without losing a beat, there’s a cut to an image of a delicious-looking meal Hannibal is cooking. An absolutely fantastic way of conveying a meaning. It starts so strongly, it is almost obvious that it won’t be able to keep up. But, with the exception of a couple of episodes mid-season, it doesn’t let down. The ending is as powerful as the very beginning, which was really satisfying. I can’t recommend this one enough to anyone with the guts to watch it. This is my design. 9/10